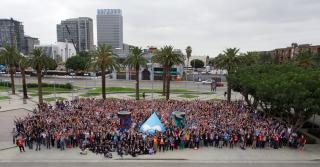 A summary of DrupalCon Los Angeles, including the Higher Ed Summit.

Because Drupal began as an open source project by a student, Dries Buytaert, in his dorm room and has essentially been a labor of love by many individuals over the years, today the community maintains the feel of a grassroots movement. The software is still free to use and many developers and users actively give back to the Drupal Association by contributing and maintaining code, training new users, and organizing events. Perhaps this is part of why it’s so popular among mission-driven organizations and higher education institutions.

The Drupal community is by far one of the largest content management system (CMS) communities I’ve seen, meaning those using the platform reap a tremendous number of benefits. With 1.1 million websites running on the Drupal platform and over 30,000 active developers in the past 15 years, almost every challenge and use case has been identified and addressed. This is a huge pool of people to reach out to when you need help.

The higher education summit was the highlight of my DrupalCon experience. Kudos to Christina Dulude, Web Architect at Dartmouth, and Shawn DeArmond, Web Development Supervisor at UC Davis, for organizing these sessions.

Drupal powers more than 26% of all .EDU websites and more than 70% of the top 100 universities. I was inspired to hear the various ways schools are using it - from a single, centralized all-in-one site at Amherst, to support for more than 1,900 individual sites at Stanford. Some schools have just one or two siloed departments using Drupal, while others are standardizing on the platform campuswide in an effort to share resources and reduce the IT costs of supporting multiple systems.

A prominent theme in the panel discussion and breakout sessions is the tension between centralized web teams and academic departments. “The Wild West” was the choice description for the lack of website governance across the myriad of divisions within a university. Some web teams have addressed this by providing departments with a “locked-down” version of Drupal, allowing brand standards and style guides to be enforced while restricting platform capabilities, inevitably leading to workarounds when the college dean makes a specific demand of the website.

Surprise in the Enterprise

Surprisingly, Drupal’s powerful community and the Drupal Association are reasons Drupal is sometimes not selected as the CMS platform, especially in larger organizations. Whether it be for security, support, or the classic “nobody ever lost their job for picking Microsoft,” there have always been excuses for picking a proprietary system over an open source one. Software vendors, particularly those with marketing dollars to put toward content generation, often publish documentation on open source platforms meant to instill fear, uncertainly, and doubt in decision makers. This has resulted in a flood of myths about open source content management systems, running the gamut from higher implementation costs to a complete lack of training support.

Enter Acquia. Acquia provides cloud hosting, developer tools, and around-the-clock support for users of one CMS: Drupal. They have done more than any other company to make Drupal “Enterprise Ready.” (We’ll save the debate on what “Enterprise Ready” means for another day.) At DrupalCon they shared their successes with major implementations like The Weather Channel, which supports millions of users daily and experiences frequent traffic spikes. And, because Acquia has significant marketing resources, they have been able to dispel the myths around the platform.

Overall, it was the community that impressed me most at DrupalCon. The spirit of cooperation and collaboration is just one reason why so many organizations actively contribute modules to Drupal or make an effort to share code with other schools. The extremely active community is a driver for more and more companies and schools moving to Drupal and as the number of organizations using the platform grows, both Drupal itself and community continue to grow and become stronger.

At the conference Acquia CMO Tom Wentworth declared Drupal 8 will be the biggest CMS release in history. I’m definitely looking forward to seeing what’s in store and talking about it with you at next year’s DrupalCon in New Orleans!