The Future of the Virtual Campus Tour

When most people think of virtual reality, they conjure images of clunky headsets and an endless sea of wires and sensors. They may think of video games, and futuristic setups with users strapped into sophisticated rigs exploring complex digital environments. They almost certainly don’t think about higher education. But as the technology progresses, it might be time to start questioning how higher education can benefit from virtual reality.

Rudimentary virtual reality systems began popping up as early as the 1950s, but it wasn’t until the 1990s that anything remotely resembling a viable consumer product hit the market. In 1991 The Virtuality Group released a sophisticated headset and body suit that provided an immersive virtual reality experience for the “bargain” price of around $73,000. While cheaper alternatives could be found — such as Nintendo’s $179 Virtual Boy — none ever achieved widespread adoption and were panned as little more than cheap gimmicks.

Today the virtual reality industry has grown by leaps and bounds. The experience that cost tens of thousands of dollars to create in the 1990s can now be delivered for as little as $1,500 to $2,000. While many argue that the price tag is still too expensive, companies like Sony, Samsung, and Google have leveraged existing smartphone technology to offer virtual reality headsets for as little as $15. While the functionality found in products like Google Cardboard is quite limited, and requires the user to have access to a smartphone, it might be time for the higher education industry to take notice of virtual reality and start thinking of ways to utilize it as a valuable recruitment tool.

Visit Campus Whenever and Wherever You’d Like with Virtual Reality

For prospective undergraduate students, visiting campus is one of the most important steps when deciding where to apply. The campus visit allows prospective families to get a sense of campus life, ask questions on the tour in real time, and interact with current students to determine if a particular college or university would be a good fit for them.

It’s an experience that most existing website campus “tours” in video or photos just can’t replicate. But virtual reality could change that.

When engaging with a web-based campus tour, the prospective student is limited to a predetermined path. They are often presented with static images and slideshows that adequately represent what the campus looks like, but not what it feels like. For prospects who don’t have the time or simply can’t afford a trip to campus, it’s a poor substitute for the real thing.

Compare that experience to a video virtual tour, like the one produced by Seattle Pacific University. When using a virtual reality headset, the viewer can engage with the virtual campus in ways that simply aren’t possible with a traditional mobile or desktop device. They can pan around in any direction and focus their attention as they see fit, just as they could if they were physically standing on campus. While it’s possible for viewers to mimic that same freedom by dragging their cursor on a screen, the experience provided by wearing a headset and simply moving your head is far more intuitive and immersive.

Bringing the Virtual Reality Experience to Your Prospects

While the demand for virtual reality is certainly growing, it’s still not nearly as ubiquitous as smartphones and laptops. In short, there’s no guarantee your prospects will have access to a headset with which to view your virtual reality tour. Until the market evolves to a point where VR headsets are commonplace, you’ll have to bring the experience to them.

The good news is it might be a lot cheaper than you’d think.

Direct mail is still a popular, and effective, marketing tool for colleges and universities and it’s a perfect fit for virtual reality. Whether you choose to center a campaign around a virtual reality experience, or opt to include a cardboard VR headset as part of an existing campaign, the $15 cost per headset can be reduced dramatically when purchased in bulk — with some vendors claiming less than $1 for large orders.

In 2015, the Savannah College of Art and Design took this exact approach when they mailed 5,000 cardboard VR headsets to accepted students. 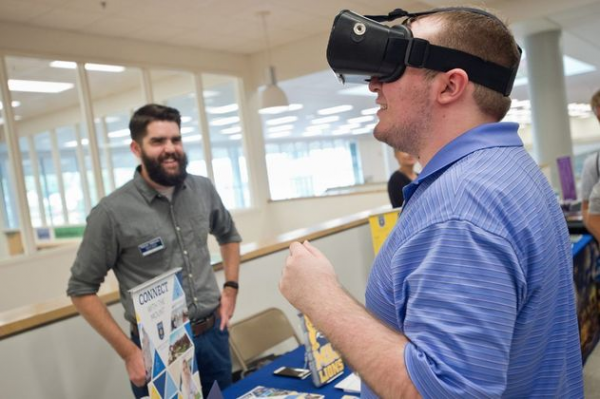 Another great opportunity for virtual reality is to incorporate it into college fairs and high school recruitment visits. Mount St. Joseph University took this approach at the 2016 during the Columbus College Fair.

Bringing along a few inexpensive headsets, or even setting up a more expensive rig, is a great way to drive traffic to your booth and give prospective students the chance to engage with your campus in an immersive way.

The Future of Email Newsletters
View All Insights